Below we present the story of the server. 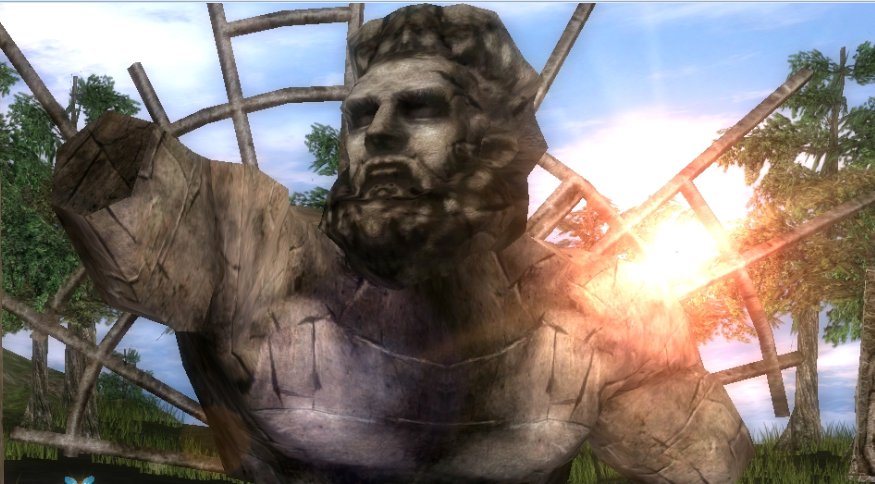 Each blade of grass exuded brightness and pristine energy.
The trees were richly clustered with flowers and leaves, delighting the local population with their small and pink flowers,
which were soon to provide the settlement with valuable goods, such as cherry fruits.

In the year 2000 of his reign, Xanthus, as usual, looked down from heaven on the people he cared for.
Not like a father for his children, but more like a boy for his new toys. Xanthus was still inexperienced and not quite aware of the enormous duty that rested on his shoulders.
The young god always made sure that the land yielded abundant crops, the rivers surrounding the city provided enough goods to provide for his people, and that peace reigned among the household of his beloved city.
Looking at his beloved land, of which he was guardian, he was completely unaware of what was about to happen soon.
On the same day, in the year 3056, his eyes traveled to a beautiful water reservoir near the town of Randol.
He noticed a woman bathing there, as it might seem at first glance. Admittedly, she was not the ordinary mortal Xanthus dealt with on a daily basis. It was a forest nymph.
Young and beautiful, in all its glory, she appeared to the young god. He was charmed by her.

For the first time, Xanthus descended from the heavens to the earth to admire this miracle of nature.
The forest nymph immediately charmed her observer, as she used to do with youngsters.
Meriel, because that was her name, wrapped it around a little finger.
Conscious of her charms, she sparked a feeling of desire in the young god.

Completely unaware of the revealed emotions, Xanthus fell in love with her.
The misalliance itself would not be a bad thing if it were not for the fact that Xanthus had completely abandoned his duties.
Only a month after meeting the woman, the earth began to lack the divine hand that contributed to fertility and prosperity.

Young people forgot about the world, only they mattered.
With each passing day, the grasses withered, the flowers froze and died.
People began to feel anxious, and then fear.

Somewhere in the depths of nowhere, dark forces began to gather under the command of Briareus, an ancient demon who had always wanted power and glory.
The leader of the unclean forces of the underworld was getting ready to attack the unsuspecting Xanthus.
Briareus ascended the throne of Xanthus and began his reign spreading fear and terror. It was a struggle to survive. Not only for humanity, but for every living thing in this land.

Briareus spared Xantus and Meriel and left them for the end. A real dessert.
Once the ancient offspring of hell had appropriated everything, the climate began to change. At first it became inconvenient to any living creatures that still managed to survive.
Over time, living organisms either had to evolve into hideous creatures, adapting to the harsh and dark climate, or simply surrender and perish.

As the changes went so far, Meriel, who was drawing her life energy from nature, suddenly felt a disease already ingrained within her.
Rot developed in her guts. Xanthus, devastated by the discovery of the events of the past only month, struck straight into the attack.
Seized by fury, he decided to take back what was his in frustration. Authorities.
Unfortunately, it was too late for that. The unimaginable damage Briareus had done was already deeply embedded within this realm.

Xanthus, in a divine frenzy, flatten the offsprings of hell in his way to the ground. The divine anger was so enormous that his very silhouette seemed to radiate accumulating emotions outward.
The glare of silver and blue that surrounded him hurt his enemies. He distracted his opponents and the darkness surrounding him.
It would seem that there was still hope.

But Briareus was not idle. He had prepared himself well for the inevitable confrontation with the power of Xanthus. The ruthless Briareus carried a magical artifact, Xiaoh, in his hand.
The blade, carved from the oldest and hardest rocks from the bottom of the ocean, melted in the fire of the divine forge, has become a tool of unprecedented power.

The power of Xiaoh was unknown even to Xanthus.
Completely oblivious to the danger, the young, furious god was going to confront the demon that sat on his throne.

That great day decided the history of a land that was once rich in wealth.
The city's population has decreased significantly. People and animals began to fall into a state of depression. Living organisms mutated into disgusting creatures.
The suffering of everything that Xanthus cared for motivated him to act. In a weird way, this whole nightmare gave him energy. Energy born out of anger.

People made sacrifices of the riches they had left. It was the most precious thing for them now. Last summer's crops, the most valuable ores and material goods were placed on the altar.
Thinking they had angered the god with something, they spent their days in prayer. It was a cry for help that Xanthus had never heard before. Every word dripped into pain and suffering.

The final duel was about to take place on the terrace of the world that once belonged to Xanthus.
It was a place from which the young god could observe the entire continent of Iris in peace. Not only Randol, although it gave him the greatest pleasure.
Briareus, mocking his rival, greeted him, once seated on his throne.
They faced each other wildly, and after a second they both fought an unequal battle, because, as we know, god is immortal, but the demon is not.
Briareus prepared himself very well for this clash.
Holding the power of Xiaoh, he was convinced of his superiority.

The fight, so far, was limited to Xanthus 'wild attacks and Briareus' agile dodges.
The demon came up with a plan to outsmart the god to snatch him out of his berserk frenzy for a second.

From behind the great gates leading to the terrace, the silhouette of Meriel emerged, calling for her lover with a distinct grimace of suffering.
Xanthus stood stunned staring at his beloved, squirming with pain.
He met her eyes and realized it was just an illusion. Her eyes were black, soulless, like all the offsprings of Hell he had slayed mercilessly on the way to Briareus.
He quickly woke up, preparing for another final blow to the merciless demon.
It turned out it was too late.
Xanthus felt a terrifying and consuming pain.
It felt as if someone had poured caustic acid on him.
Xiaoh's blade passed through the divine forearm like butter, burning every living cell in his body it came across, starting from where his right hand was severed from the rest of his body.

The pain of Xanthus was unimaginable.
The ground trembled with suffering. The animals fled in panic.
The mages tried to stop the collapsing buildings with magic.
The city council came to the conclusion that it might be the end of the world, which was also true for this place.

Briareus, standing in triumph before his opponent, laughed crudely at his defeat, which seemed imminent.
Panic seized Xanthus. He didn't know what was happening to his body. How was it even possible. After all, he was an immortal being. It had to be another trick.

The young god has just seen the specter of his end. Defeated by deception for which he was so ashamed.
His body refused to obey him. Muscles turned to boulders, it was even hard for him to concentrate his thoughts.
Seized by panic fear, he feared for the fate of his land. What would happen to the people who counted so much on him.

The city has plunged into chaos. A new era has come. The era of chaos and fear under Briareus.
The city's population decreased from second to second. Many inhabitants died as a result of the earthquake, and even more died in bloody clashes with monsters.

Xanthus, with the last of his strength, tried to summon other deities for help. He was still looking for a way to save at least part of the world he knew. Suddenly, space-time was bent.
A powerful paradox has arisen, the immortal being dies. In an instant, the earthquake and the anxiety subsided. Briareus looked at his eyes in confusion.
Xanthus, with the last of his strength, closed the whole land in a peculiar space-time bubble. The time gap effect allowed the young god to trap this doomed land in an alternate reality.

The demon was furious. He did not wait for the opportune moment to become the ruler of the cursed and forgotten by the rest of the world nothingness.
With a swing, Xiaoh punched Xanthus in the center of the chest, intending to interrupt his efforts.
The attempt was unsuccessful, as the god's body was almost completely transformed into mystical marble. An incredibly powerful artifact crumbled on the god's body.
A few shards managed to break through the top layer of the stone, but Xanthus felt no pain anymore.

Briareus, not knowing what to do, cursed the now defenseless Xanthus.
For the betrayal of his land in the name of love, he was to repent for eternity.
The demon trapped the god's soul in the statue and threw him forcefully into the abyss from the observation deck.
There was no more hope. The moment the petrified Xanthus landed on land inhabited by imprisoned souls, something unexpected happened.
A great explosion, somewhere in the universe, was impossible to miss.

Briareus knelt on the Terrace of the World and looked into the abyss.
He could see nothing but a small town plunged into chaos and its nearby gloomy grounds inhabited by bizarre creatures.
Dull and badly damaged, Xiaoh shattered into tiny particles.
From the dust, which still emanated with tremendous energy, Briareus dug the metal hilt of his sword and threw it angrily into the abyss.
The remnants that remained of this mighty artifact were no longer as useless as he thought.

The next day, the city revived with its daily rhythm. As if nothing had ever happened. Peace and joy reigned throughout the land.
And the only thing that remains after the events of the last day is a dark land, trapped somewhere in the abyss of nothingness.

It is rumored that some time magicians still have nightmares about events from thousands of years ago.
But as with nightmares, they are unreal and melt away right after you wake up.

Is this really true?